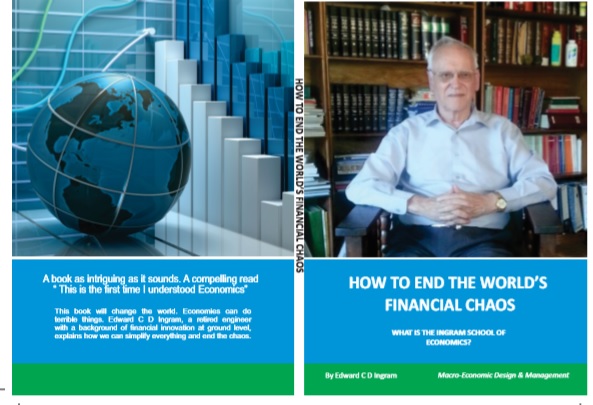 To all our Futures

This is the first time in the history of the world that an entire economy has been designed by an engineer.
"There is literally no other person who has looked further and seen further with such clarity as Edward Ingram." Dr T Chowa, Lecturer (Actuarial Science & GSB), ex NUST.

THE OUTCOME IS FINANCIAL CHAOS

The Complex Systems Theorem cuts in, saying that in a complex system when even one thing is wrong, there is a cascade of unwanted effects.
Consequently, policy makers are not in full control.
As they admit, there are some things they don’t understand.

FURIOUS
Edward Ingram was furious. Many of his most credit-worthy clients were facing huge losses because of the mistakes being made in the housing finance sector. Inflation was taking the real value of their debts down and yet the lenders were demanding unaffordable increases in monthly payments.

Supply must be allowed to balance with demand.

The practical solutions of how this can be done come from his experience as a successful financial innovator in the financial services industry.

Please note that not all the following reviewers have studied the entire book.

"There is literally no other person who has looked further and seen further with such clarity as Edward Ingram." Dr T Chowa, Lecturer (Actuarial Science & GSB), ex NUST.

“This simplifies everything.” Professor Leon Brummer, professor of stock broking at the University of Pretoria, said of the new lending, savings, and investment model.

“This book will inspire rethinking on the perimeters of economic thought and theory, and their practical use in policy making. A ‘should-read’ for budding researchers in Financial Economics to expand its horizon.” Dr Rabi N. Mishra, Economist, and a Chief General Manager, Reserve Bank of India.

“Dear Edward, I am following your endeavours of rewriting the economic framework with great interest and am on the same page with you on almost all the issues you raise from time to time.” Dr Azam Ali ex Senior Economist Bank of Pakistan.

"This Ingram School is the first I have ever seen which addresses the critical issues head on and in a sound, academic way." - Riekie Cloete, an experienced macro-economist and past mentor of post-graduate students.

“These reforms are critically important.” Andrew Pampallis, Retired Head of Banking at the University of Johannesburg, referring to the lending and savings reforms.

“Out of 40 schools of economics I have studied, as taught at universities, all miss the key points of Behaviour Change. It is time for some new thinking.” Tim Hosking, a Building economist. See next page.

These ideas will become prescribed reading at universities.” Professor Evelyn Chiloane-Tsoka from the University of South Africa.

“I am fascinated by what you are doing.” Professor Daniel Makina from the University of South Africa, professor of Finance, Risk Management, and Banking.

Tim Hosking has studied around 40 schools of economics put forward by economists over the past centuries. Here are his comments:

“The following are key economics models taught at universities. They all have some well-considered logic. But when you consider Behavioural Economics they all contain fatal flaws:”

1. Keynesian Economics – an excellent understanding of managing economic cycles. My concern was that the human behaviour has a narrow pattern of normal - going between exuberance and panic and requiring a control tighter than what governments were capable of and politicians are willing to react to. An easier, quicker adjusting model, along clearer defined parameters, would be the Ingram Model.

2. Laissez Faire Capitalism – uncontrolled competition consumes wealth with most of the competitors drained and few very well off. Wealth stripping means that the consumer base is impoverished and fewer of the competitors survive. A restricted field would mean more can healthily compete and grow themselves and the economy. The Ingram Model is not a complete solution but aids the prevention of wealth stripping.

3. Monetarism – The Ingram Model would replace this in a more controlled and less volatile fashion.

4. Marxism – The goal of social sharing of resources was raised during the period of vast wealth differences. Unfortunately, this was only partly resolved by revolution. Behavioural Economics was replaced by desire and ignored the fact that people want more. Marxis­­­m replaced the obstructions of the Nobility with that of their system. By curbing wealth stripping the Ingram Model moves in the right direction.

5. Game Theory, Zero Sum Games – John Nash (Beautiful Mind), John Neuman amongst others. These brilliant models are corrupted in a Macro environment by political interference, slow reaction times and Dualism. In a sense they work when their scope expands to include these interferences, but they become less relevant to the problem. The Ingram Model will curb the interferences allowing the Macro Economic scope to be reduced to the immediate problem.

6. Positive Money – This influential UK group is looking at what some people call ‘QE for the people’ whereby money is created and given to the government or the people to spend rather than using the Keynesian ‘borrow and spend’ approach or reducing interest rates. The Ingram Model is significantly better thought out. It acts faster, protects small businesses better, has a better balance, better control, is less complicated, and has a damper which automatically protects the economy and savings if too much money is created.

JUST SOME OF THE BENEFITS

1.       Savings and pensions will rise as if the beneficiaries are still working.
2.       Currency prices will not leap around.
3.       Finance for housing will behave as if there was a fixed rate of interest and a fixed rate of rising National Average Earnings, NAE. Every year 4% less NAE, (4% less average income, almost 10% less after three years), will be paid.
4.       People’s homes and businesses will not be repossessed when interest rates rise.
5.       Interest rates will not be managed and will find their own level. They won’t change much in this new, stable economic model.
6.       The optimum use will be made of all the nation’s resources, including credit, and maybe the Zimbabwean economy will be jump started with a free injection of Foreign Reserves at no cost to anyone.
7.       In Zimbabwe for example, the queues at banks will immediately end and the queues for Forex will abate, or end completely.
8.       The new currency will be one of the most trusted in the world!
How can that be for a nation like Zimbabwe? Read on. Zimbabweans are some of the most ingenious people in the world – how do you think they survived all this time?
---------------------------

NAE – National Average Earnings – this may be replaced by a wages index if not available from the statistical office
AEG – Average Earnings Growth – the per annum rate of growth of that chosen index
DEBT-BASED MONEY – Money that was borrowed to get into circulation
DEBT-FREE MONEY – Money that was not borrowed to get into circulation
GDP – Gross Domestic Product – the total annual income created from within the national economy
ILS – Ingram’s Lending and Savings
KSSP – Keynes’ Stable Spending Platform
MMT – Modern Monetary Theory
NICHe – National Investment Clearing House -  a hands-free way to move money out of the hands of fraudsters and eliminating the need for any subsequent ongoing money laundering delays or administration.

Stock of Money – a better definition of money supply – it refers only to money immediately available for spending. It is closely similar in meaning to ‘MA’ as published by the Cobden Centre.
Money in spending circulation - narrows the stock of money definition to exclude money temporarily put aside on standby.
Sovereign Money – money created by the state.
True Interest, True Value, True Cost - These have their equivalents in real interest rates etc. The difference is that the true figures are based on the marginal rates above Average Earnings Growth, AEG% p.a. not above the rate of inflation. It is important because every person and entity earns or has a share of National Average Earnings, NAE. A positive true rate of interest moves units of NAE from the borrower to the lender. A negative true rate reverses this.

As any first-year economics student is taught, prices adjust to bring about a balance between supply and demand. Students learning this would think that when the rate of inflation increases:
But what they are taught is a little different. They get taught that:
They call this economics.
IT'S A COMPLETE MESS
THE OUTCOME IS FINANCIAL CHAOS

APPLYING THE FIRST LAW OF ECONOMICS

This short section is for the technical reader
By applying the first law of economics, wherever it is applied, the outcome is that prices adjust to balance supply with demand.
1.       At the same time, it optimises the use of all the national resources, maximising employment, and finding the best use for credit, commodities, and end products, across the board. It cuts down on waste on a grand scale.
2.       The entire financial framework becomes self-adjusting and stable.
3.       It simplifies everything so much that many readers say this is the first time they understood economics.
4.       The reduction in risk and instability cuts costs, breeds confidence, and ensures that a great deal more wealth stays with those who earned it. Businesses and homes are far less likely to fall into the hands of the wealthy and the powerful institutions at knock-down prices because the mal-adjustments created by the current economic / financial framework will have ended.
5.       The self-adjusting framework and the suggested tighter management controls will reduce the burden on the management of the economy to such an extent that cyclical recessions will be almost impossible, unless created on purpose.

A distance learning university course in the subject is now available online to nationals as well as the international community. It is based at the National University of Science and Technology’s Centre for Continuing Education, NUST-CCE. www.nustcce.com'

It comes under Professional Courses and uses the name MACRO-ECONOMIC DESIGN & MANAGEMENT.